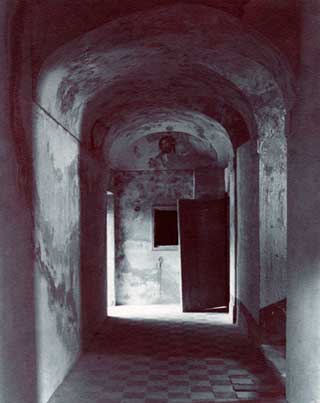 Join Mike at the offical opening on Sunday 28th August at 4.30 pm
and discover his wonderful Chrysotype, Argyrotype, Platinotype and New Cyanotype photographs
Since the first days of photography there have been alternatives to silver for print-making. In 1842 Sir John Herschel discovered that light-sensitive salts of iron could be used to make prints in the pigment Prussian blue (cyanotype), or the precious metals: gold (chrysotype), silver (argentotype), and mercury (celaenotype). In 1873 William Willis extended this list to platinotype and in 1917 to palladiotype. These iron-based printing methods are known collectively as siderotypes, from the Greek for iron: sideros. Fine paper is hand-coated with the chemicals and exposed to an ultra-violet lamp in contact with a large negative. Print colour may be chosen to suit the artist’s expressive intention for the image. These examples have been selected from various sets of Mike Ware’s work to illustrate the range and characteristics of his updated siderotype processes.

MIKE WARE: Following an academic career in chemistry, Mike has been independently committed since 1992 to studying the history, science, and art of ‘alternative’ photographic processes, especially siderotypes – those based on iron photochemistry. He has supervised postgraduate research in photograph conservation, and acts as a consultant to major museums. He exhibits his personal photographic work, and conducts workshops, worldwide. His research has appeared in over 50 publications in both the popular and academic literature, including four books.
http://www.mikeware.co.uk

Overview: This ‘user-friendly’ iron-based silver printing process was devised in 1996, using an unusual salt – silver sulphamate – in a ‘single-bottle’ sensitizer solution, having a long shelf-life, to avoid the problems of image loss caused by silver nitrate. The resulting purplish-brown print of nanoparticle silver has better prospects of endurance and a finer gradation than the traditional iron-silver processes, and may be readily toned.
Background: The Argyrotype process is a latter-day improvement on the late nineteenth century processes of Kallitype, Van Dyke, Sepiaprint, and Brownprint, which were, in turn, all offspring of Sir John Herschel’s Argentotype of 1842.
http://www.mikeware.co.uk/mikeware/Argyrotype_Process.html

Overview: The New Chrysotype process has tonal and surface qualities and permanence like Platinotype-Palladiotype, but the added feature of beautifully muted colours, controlled by the chemistry and physics of the process. The photographic artist should find here a whole new palette of non-literal colour to explore in printing archival ‘monochrome’ images.
Background: Herschel’s original gold-printing process of 1842, which he dubbed Chrysotype, encountered difficulties which prevented its adoption into the photographic repertoire.This ‘forgotten’ process was revived in a novel version in 1987 by means of some sophisticated modern chemistry, which made it both economic and controllable.
http://www.mikeware.co.uk/mikeware/New_Chrysotype_Process.html
http://www.mikeware.co.uk/mikeware/Prints_of_Gold.html
http://www.goldbulletin.org/downloads/ware_3_39.pdf

Overview: This process provides an image in stable Prussian blue pigment, from a ‘single-bottle’ sensitizer solution having a long shelf-life.  Requiring only a short UV exposure, it yields a superbly graduated tonal scale, on a matte paper surface, having a maximum density verging on black. The image colour may be easily modified by a variety of toning agents, and the inexpensive sensitizer may also be applied to fabrics and other surfaces.
Background: Sir John Herschel’s traditional cyanotype process, now practiced for 166 years, became known as Blueprint, the first reprographic process. It is the oldest, simplest, safest, and cheapest alternative photographic process – but not the best in image quality! The drawbacks of the traditional cyanotype process were overcome in 1995 with this chemically up-dated version.
http://www.mikeware.co.uk/mikeware/New_Cyanotype_Process.html

Overview: Printing in platinum and palladium is acknowledged as the summit of alternative processes – images formed in totally permanent ‘noble’ metal, exquisitely graduated in tones of neutral grey or warm sepia, with a beguiling luminosity in the high values. This modernized version provides a ‘print-out’ image, having some advantages in economy, accessible chemistry, and exposure. Platinum and palladium may be used individually, or mixed in any proportion, allowing control of image hue and contrast.
Background: Platinotype has attracted photographic artist-practitioners since William Willis’s invention of 1873, and became the dominant process in 1900, but was commercially discontinued by 1937. The traditional method is substantially a development process, in contrast to the present version.
http://www.mikeware.co.uk/mikeware/Platino-Palladiotype.html
http://www.mikeware.co.uk/mikeware/Eighth_Metal.html
http://www.platinummetalsreview.com/dynamic/article/view/49-4-190-195