Rob Love ‘At the End of the Street’ 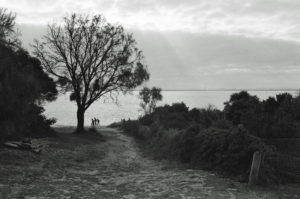 And with a bayside environment a short walk away, the Contax, after a little bit of tidying up, has been back at work.

The end of Rob’s street leads on to Port Phillip Bay. That brings wonderful interactions with light, sky, water and people and rich pickings for black and white photography.

The Zeiss Contax IIIA is also relatively discreet and that helps in spontaneous settings.

Master printer Les Manning worked with Rob in producing this silver gelatine exhibition, “At the End of the Street.” 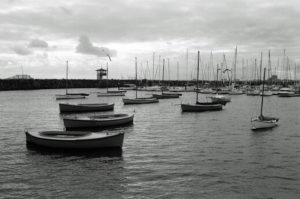 Rob Love is a Melbourne-based award winning photographer who’s images hang in a major Los Angeles medical centre and private collections in the US east Coast. His photographs have also been acquired by collectors locally in Melbourne, Sydney, Brisbane and Auckland. 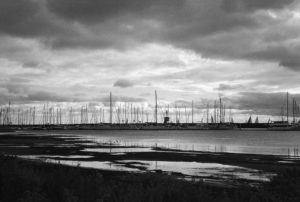 and the MLC Acquisitive Art Exhibition. Rob was also selected for the USA Darkroom Gallery ‘About Trees’ juried exhibition in 2013.

As a commentator, photographer and journalist Rob was intimately involved in the America’s Cup from 1983 through to 1992. He covered the 1987 World 12 metre Championships in Sardinia, the Admirals Cup 1989, sailed on Fisher and Paykel NZ in the 1989 Fastnett race and was information officer for the 1988 NZ America’s Cup challenge in San Diego.

From1989 to 1992, he was Yachting editor for Boating NZ and concurrently founding editor and main photographer for the upscale STYLE magazine.

Rob creates breathtaking photographs of the natural interplay of water and light. The images are captured by applying slightly extended shutter speeds, and without the use of image-enhancing software.

Rob Love has an affinity to light and its interplay with the natural environment. This attraction has inspired his work since he first pressed a shutter decades ago.

For years, he explored clouds and his work provided the backdrop for an international publication that was translated into 13 languages. His latest work explores the visual symphony created when sunlight dances with water.

He has twice been a semifinalist in theprestigious Moran Contemporary Photographic Competition.