Karl passed away on the 19th of January 2012 He will be missed not only as an outstanding creative photographic artist but also as a dear friend. Don’t miss a chance to view Karl’s exhibition and enjoy this remarkable man’s work. 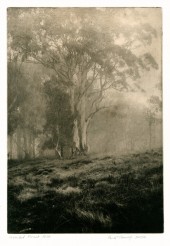 ABOUT KARL KOENIG: Albuquerque ,New Mexico USA is Karl’s home town where his beautiful studio set up for not only his work but to teach students who come from various parts of the world to learn about Gumoil. Karl has published and exhibited work extensively throughout the world. He published his first book on the gumoil in 1994 (Focal Press, Boston) Karl works mainly with two processes: polychromatic gumoil, which he discovered in 1990, and non-toxic photogravure which uses Solar Plates. More about Karl http://www.gumoil.com/

ABOUT PHOTOPOLYMER GRAVURE  “A positive photographic image is exposed  under strong light to a metal plate which has been coated with a sensitive polymer layer (marketed as Solar Plates).  When the plate is developed it forms an intaglio surface receptive to lithography inks.  The ink is rolled on and the excess is wiped off before rolling it  under great pressure onto damp paper on an etching press.  Thus, numbered and identical prints are made. 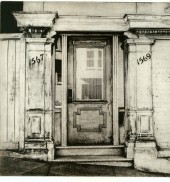 My interests range from agricultural architecture,  vintage structures in New Mexico, creatures of the open market, the residue of the Holocaust camps, memorial sculpture, magnificent trees around the world, and still life images of flora and small objects, especially jeweled ones.”