Bergger Pancro 400 is composed of two  panchromatic emulsions containing silver bromide and silver iodide which differ from each other by the size of the grain. This allows the film to achieve an extremely wide exposure latitude.
The crystals are precipitated by a double – jet method controlled by computer. The two emulsions are panchromatic and are stabilised through systems which are among the most developed.

Bergger Pancro 400 cut sheet film is coated on a substrate PET 175 microns. It has an anti-halation layer that becomes clearer during treatment, and an anti- curling layer on the back of the film

Storage and Handling
Store unexposed film in a cool dry place, in the original sealed package. 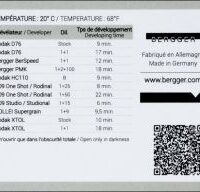