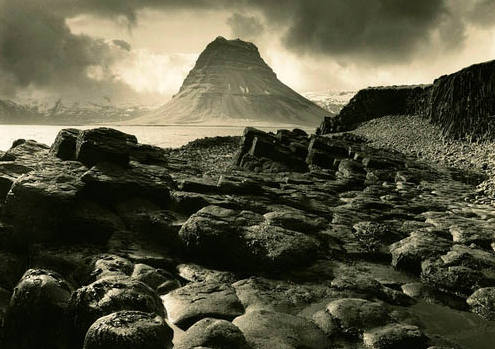 Icelanders know that the recent chaos caused to air travellers around the world after the volcanic eruptions by Iceland’s Eyjafjallajokull could be as nothing if predictions of another volcanic eruption come true. They also know that Eyjafjallajokull’s more active and much larger neighbour Katia is said to be linked to it in terms of activity and that scientists have predicted it may also erupt in the near future – ‘near’ being in ‘our’ time, not ‘geological’ time.

Iceland, ‘The Land of Ice and Fire’, has a strong and omnipresent “Middle Earth’ feel to it. Evidence of its volcanic history is everywhere, for Iceland is built entirely of volcanic rocks – basalt, rhyloites and andesites. The central highlands are unpopulated and barren. Glacial caps and black lava deserts reach for miles. Near the coast extraordinary craggy peaks are often shrouded in low cloud, making belief in Iceland’s trolls and ‘hidden people’ easy to understand. For Icelandic folklore is rich with tales of elves, gnomes, dwarves and trolls and surveys frequently suggest that belief in these beings is still widespread in the population.

I still use film for the qualities it has and I don’t use digital manipulation to introduce what was not there. For me, monochrome removes possible distractions that colour can introduce and it reduces the landscape to the basics – form, texture, light and tone. However, volcanic rocks and lava can be frustratingly close in tone at times, especially in dull light, which for much of the year is

How the land speaks to us is a personal thing and capturing the ‘feel’ of the land on film can be initially difficult and oddly elusive in this primitive landscape and time is needed to develop a relationship with it. In summer the days extend through the nights. In winter the nights eat up the days. Changes in the weather are frequent and storms can be spectacular. Brooding skies accentuate the already dramatic and sometimes eerie landscape where trolls lurk at night and get turned to stone by daylight. But the Icelanders have a saying “If you don’t like the weather, wait a minute”. So the photographer with patience can learn to express their feelings in this land with a personal vision. This is mine, part of a larger and ongoing body of work.